In our case, we can’t seem to get the Bear to sleep. When Bear came home from India at four years old, he traveled like a champ. Every hour on the plane was a new adventure with so many firsts: Skittles, iPad fun, movies and so many snacks. Then, our layover in France offered new adventures like a playground, climbing wall, people moving sidewalks and even more snacks. Somewhere over the midwest, on the last stretch into Seattle, he fell asleep and was impossible to rouse as we juggled him and our luggage through customs.

Our very first trek across the world as very new parents was a breeze.

While we’ve been on a few trips within the U.S., we haven’t taken Bear further than a few hours away from home, by plane or car. Nepal was our first real test of his travel capacity after being fulling indoctrinated into our family.

flying so far away to spend time with children who all live in orphanages. We could feel the unspoken worry of revisiting his early years to visit children who are, for the most part, living the life he left behind when he was adopted from India. We focussed on the excitement of spending time in a place where he wouldn’t be a minority and where the children love what he loves – soccer, basketball and friends.

Travel to and from Nepal was a breeze. Parks rarely slept and stayed happy, even when 40 hours of travel started to wear on Justin and I.

We arrived in Nepal late at night. The seatbeltless taxi ride to the volunteer house was less harrowing than a daytime ride on Ring Road, even though Parks sat in the back with wide eyes as cars swerved in and out of traffic.  Justin and I watched the city go by, trying to orient ourselves as Bear bombarded us with questions.

We woke up the next morning to sunshine, and a little boy who was ready to explore.  Bear went up and down the three floors of the volunteer house, peering

over the edge of the balconies and introducing himself to his new volunteer friends. They didn’t know it, but over the next two weeks they were about to become his competitors during daily rounds of Uno, Farkle and Left, Right, Center. During our time in Nepal we’ve been fortunate to meet amazing people from around the world who find themselves drawn to Nepal – some of them again and again. This trip was no different. Bear made fast friends with Saroj and Himal, the volunteer house managers, and Ted, Ellie, Eliza, Blanca and Victor, all adult volunteers.

On our first day we attended the wedding of our friends Sam and Anita. We soaked up time with old friends, wedding performances from the children, and the Nepalese food we craved for so long. As we enjoyed the day, Bear was quickly swooped up by the young ladies (he didn’t even sit with us during the wedding, he had new dates). When he wasn’t be doted on by them, he was racing around the wedding tent with his new friend Devraj or hustling scooter rides from Chham. It was a full day on a half empty tank and a 12 hour time difference.

After the wedding, there are just a few parts of Bear’s trip that stand out in my mind. Everyday on the way back to the volunteer house, he asked Justin to purchase a Fanta at the local shop next to the school. After a week of this, Justin finally relented, IF he did some extra chores around the volunteer house to earn the money. He followed up by doing the dishes, completing extra reading minutes, cleaning our room and making the beds. The next morning that Fanta was his. He marched up with his chore money, making his big purchase. I’ve never seen a kid drink a soda so fast. Another day, when we were visiting the monkey temple, Parks decided to name

a sweet, street dog we stopped to pet. He named him Theodore after the chipmunk (Alvin’s brother, duh), but was quickly renamed Fleadore by Justin given his scratchy behavior. That day we also came across what seemed like a thousand tiny frogs that had just hatched after a heavy rain. Finally, Parks found himself in an intense bromance with Victor (who was very much in love with Blanca). Maybe it was his soccer moves, the games on his iPhone or the Spanish accent, but Bear couldn’t get enough of him.  Eventually we had to make a rule that Bear was not to enter Victor and Blanca’s room after he snuck in there one morning to see if they were awake for breakfast. They were not.

When I think about the rest of our trip, the days blur together. We spent some time exploring the city, making a trip with the rest of the volunteers to Swayambhunath

with the other volunteers, having dinner with Michael or the children, working at Chelsea Center or roaming the neighborhood shops and visiting the houses. Most days we walked the children to school, where Parks would play then go through morning assembly with his friends until it was time for them to go to class. Justin took him to eat lunch at the school and play each day while I was working at Chelsea Center. In the afternoon Parks would join me at Chelsea Center, participating in math, writing and technology classes with his friends before heading off to one of the houses for dinner and play.

In essence, being in Nepal with Bear, felt totally normal. Like we’d all been there together before.

I look back on the past nine years, often finding myself surprised by the direction my life has taken me, especially since it’s nothing like the life I imagine for myself. Somehow my fear of flying, desire to travel and meeting Justin translated into serving others in Nepal and growing our family through adoptions. I think it’s safe to say that Justin feels similarly. Bear’s natural presence on this trip is just another sign that, so far, our lives are working out just the way they should. 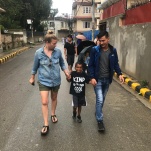 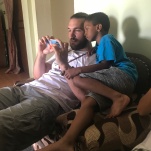 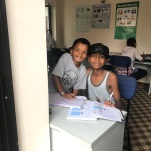 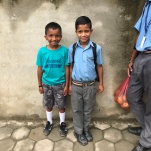 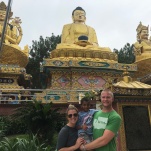